Autumn is here – my favourite time of year!  Scrunchy leaves. Clear, crisp skies. Seeing your breath. Warm coats and scarves. Squirrels manically burying seeds. Irresistibly shiny conkers that you just have to pocket. Log fires and a palette of golds, reds, browns and oranges that make you want to paint or write poetry!  This is not however, the topic of my cartoon.

Last week I was chatting to L about the day’s events on my walk home from work, when along the path bounced the most adorable puppy.  Anyone who knows me, will know that I’m a sucker for anything cute and fluffy.  I’ve been known to fight my way through a crowd to stroke some unsuspecting mutt, whilst L marches ahead with embarrassment muttering “She’s not with me. She’s not with me”.   Just the sight of a ball of fluff will more than likely cause me to let out an uncontrollable squeal of joy followed by a gush of unintelligible coos and babbles as I stroke and hug said creature to death.   I’ve even been known to shout ‘hello’ to cows and wave to cats…Yes, I would agree, these are not the actions of a sane person.

So, when I spied the puppy running down the path, without a moment’s thought or warning, I hung up mid-conversation. Just like that.  It wasn’t until after I’d had my fill of puppy cuddles that I realised what I’d done.    Understandably, L was a little bemused by the sudden disconnection – was the network down? did I drop my phone? had I been attacked by a mad axeman?  When I finally rang back to explain what had happened, she was not in the least bit surprised, for nothing can come between me and a puppy! 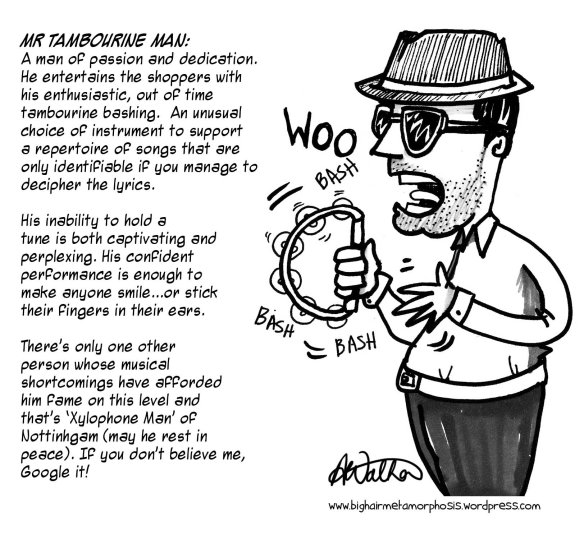 I walk to and from work every day; a good 40 minute march.  It’s a great way to wake up on a dark winter’s morning when getting out of bed is an effort and your bowl of porridge hasn’t quite started to kick in.   I stick my earplugs in and listen to one of 4 Podcasts.  BBC Radio 4’s Women’s Hour, BBC 4’s Saturday Live, BBC 4’s Mid-week or Helen and Olly’s Answermethispodcast.com.  The latter tempers the former and is not for sensitive ears.

As you would expect, I pass the same people day after day and ponder their being:  what are they like?  Do they have a partner?  Where do they work?  Why are they wearing that? Gosh I love their dog, maybe I’ll stop them so I can stroke it….

I decided to draw a few of the characters to give you a flavour – I recently  showed the drawings to a friend who walks the same route, albeit a little earlier than me.  She recognised most of the people, so I’m satisfied that I’ve managed to capture them fairly accurately.  She even shared one or two of her own commuter people. Now she texts me in the morning to say…hey, I passed ‘Greggs Man’, and I respond to say ‘I think I passed red-headed-duvet-jacket lady’!

So the next couple of posts are just sketches (no polishing) of some of the… <sings> “people that I meet when I’m walking down the street…they’re the people that I meet….each day!” (Sesame Street, People in your Neighbourhood)

I’m off to a wedding tomorrow and have been trying to draw some caricatures of the happy couple.  There’s a real art in capturing someone’s personality and features with a simple few strokes. It is not my forte and because things haven’t been going well, I decided to take a break to draw something easier – like dogs!

Walking to the shops earlier this week, I passed a lady, perfectly coiffed, with two dachshunds in tow.  Looking rather forlorn and somewhat embarrassed, both dogs were draped in sparkly pink coats and matching collars.  Had their hair been long enough, no doubt it would have been styled accordingly.

We all do it to some degree, but should their be a cut off point beyond which our desire to anthropomorphise (sp.?) our pets becomes animal cruelty? If they could talk, I should imagine these dachshunds’ tales of woe would all hinge on their owner’s desire to dress them up like barbie dolls.  No doubt the poor mites are laughed at by the other dogs in the park on a daily basis…

Having said all that,  I couldn’t help dressing my cat up at Christmas! – he looks happy doesn’t he?! 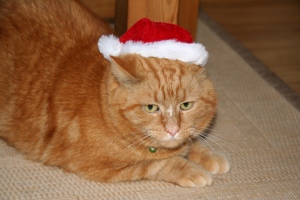 And whilst I’m on the subject of domestic pets…how about this as a method for taking your dog for a walk? (snapped from the car as I drove past) 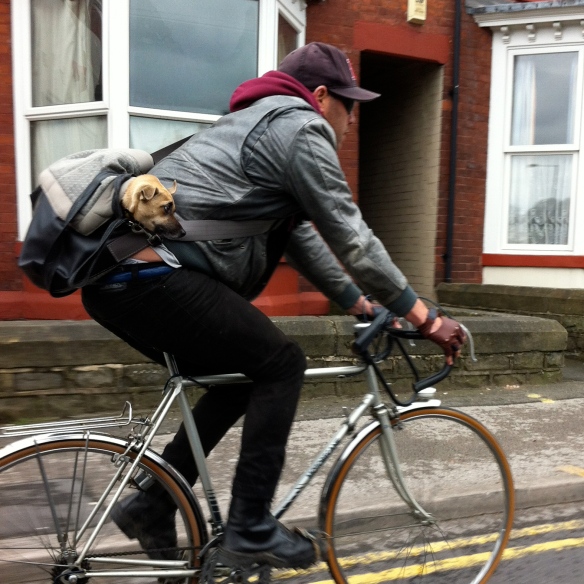 Guess who’s who? Oh how graceful!

I have a fan!! Well I’m assuming he’s a fan – yes he may be a friend, and yes he may spend far too much time on the computer, but when he asks why there hasn’t been an entry for 2 weeks then suggests I crack on with it, I think he officially becomes a fan, don’t you?

The problem is, I was not born a writer. This stuff doesn’t just splurge onto parchment from my feather quill – I have to wait for inspiration and sometimes it doesn’t hit for weeks on end even with the copious amounts of coffee and the thinking I do. Writing also requires a good deal of brain power of which I have very little to spare. And lastly, I have to live a life! But seeing as my fan base has chided me into writing something – and you know who you are – I suppose I should get on with things.

Hmmmm what to write about?Well it’s been three days since I hit the big THREE OOHHH.I found another wrinkle, L has been tweezing out some grey hairs (mine not hers) and my boobs have moved another notch closer to my kneecaps but all in all I still feel the same!I have however, started to spend way too much time considering the meaning of life? Why do we spend so much time working to pay the mortgage, raise the kids, buy snazzy cars and go on fancy holidays when life is over before you can blink? I know it’s a bit morbid but if, lets say, I live to 60 then…. I’m now officially MIDDLE AGED!!!!

In our relatively short lifespan, what contribution do we actually make to the world?We take much, much more than we actually give.We use more than our fair share of natural resources, destroy the existence of other living creatures by removing their habitats and killing off their food sources, we over fish, over farm and pollute the earth with allsorts of waste such as methane, C02, plastic, dead skin and god knows what else. Then, when we’ve taken all we want, we just up and die. “goodbye and thanks for all the fish”I’ll leave you to mull this over…

Now, on to something more light-hearted…. L took me to Crufts last week! For those of you who don’t live in the UK, Crufts is the biggest dog show in the world (is that right?). They have competitors from Europe to Japan with over 22,000 dogs shown over 4 or 5 days. Now, pretty much everyone I mentioned this to, rolled their eyes and pretended to be happy whilst secretly thinking “I can’t think of anything worse” and “POOR L”.

I have to say, when L gave me the tickets I was shocked, not because of the nice gesture but because it had to be her idea of HELL.I’m afraid I have an uncontrollable reaction to animals of any sort.Anyone who knows me well will vouch for this but on discovering something cute and fluffy, I can’t stop myself grabbing the closest person to me, pointing to the animal in question and saying “isn’t it CUUUUUTE” in a pitch which is best suited for dolphin communication.I don’t know why, but the words are out of my mouth before my brain can engage.I have often been left stroking a stranger’s puppy and cooing while L saunters on pretending not to know me.

So now you can understand why I was so shocked at the gift – In actual fact, the day turned out to be great fun.Even L seemed to have a good time.The venue was huge and sprawling – after 6 hours of traipsing around we couldn’t possibly have seen everything.L remained patient throughout even though I screeched and pointed for most of the morning.But by midday, after seeing up to 60 dogs of the same breed, when there were over 56 different breeds, even I couldn’t muster an “aaah how cute”.

We amused ourselves watching people brush and fuss their dogs.Some wore ribbons, others had bibs on to stop the drool ruining their hair dos.Collies were practicing their heel work, and Great Danes were looming over their owners but mostly they all looked worn out and fed up with being poked, prodded and mauled by the judges.

We joined the crowds to watch the agility heats and developed a new found respect for Poodles. Don’t knock ‘em, they may look poncey but boy they are masters of the agility course. We ‘Oohed’ and ‘Ahhed’ when the dogs did a round in a particularly fast time or got eliminated by jumping over all the wrong jumps in overwhelming excitement. I cried at the doggy dancing and laughed at the police dog antics.It was all thoroughly enjoyable. And for your perusal, here are just a couple of pictures: 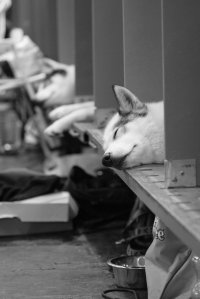 Above: Poncy Poodle “look at meeee”
not a great pick but it gives you the idea 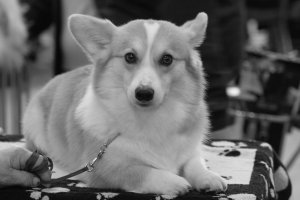 above: This Dog is famous!! She was one of the
Corgis in the film The Queen!

above: with a face like that, is there a
reason for living?

above: some people prefer dogs that don’t
require much looking after. 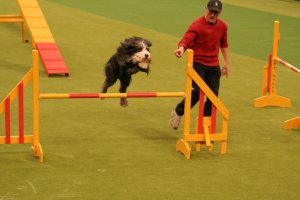 above: this bearded collie was one of the stars
in the film Holiday and some other movie I can’t remember.
Watch the video to see what happened when he completed his round!

Over my Birthday Weekend, (this has since been extended to a Birthday Week) I was graced with the presence of BOTH my parents.It’s extremely rare to have a visit from Mum and Dad at the same time! So in preparation for their arrival, I spent two solid days cleaning frantically and chastising the bunny for moulting everywhere.I screamed at L for not doing her fair share, grumbled at the lack of space to hang washing out to dry, and had restless nights worrying about the sleeping arrangements.

By the time they arrived I was worn out and there was still bunny hair floating around!However, we had a lovely weekend filled with fine dining, walks, card games and a trip to the world’s smallest cinema. With 21 seats and barely enough room to sip your luke warm tea from a polystyrene cup, it couldn’t help but maintain the air of the seedy, peepshow room it once was.

Cinema aside, everything was good fun and the weather added to the occasion by being bright and sunny for the full three days.By the end of it, I was sad to see my parents go… that’s odd. Aren’t we supposed to sigh with relief when our parents leave?

Anyway, now that I have satisfied my one fan with another entry, I shall get back to sorting out my portfolio for an interview next week! Yes, some paid freelance work with a design agency no less. If all goes well I might be inspired to tell you about it.So until next time….