Sometimes my daily routine floods me with guilt.  Guilt for the impact I’m having on the environment.  I spent seven years working in the sector, bossing (yes ‘bossing’ – I know, hard to believe eh?) people around because I wanted everyone to sit up and listen. I’d tell them to recycle because in the UK we produce enough waste to fill the Albert Hall every two hours. I’d run around switching lights off after everyone and chastising people if they didn’t turn their computer off after a day’s work.   For those seven years, I was told that the tipping point was coming – the point when the detrimental impact of human society on the planet would reach the point of no return.   I would get upset because people couldn’t see beyond today.   I left that job.  I left it because I felt helpless.

These days I still boss people around and harp on about the penguins, polar bears and climate change – people think I’m odd.  I also carry a lot of guilt around because my daily routine still leaves a massive footprint! 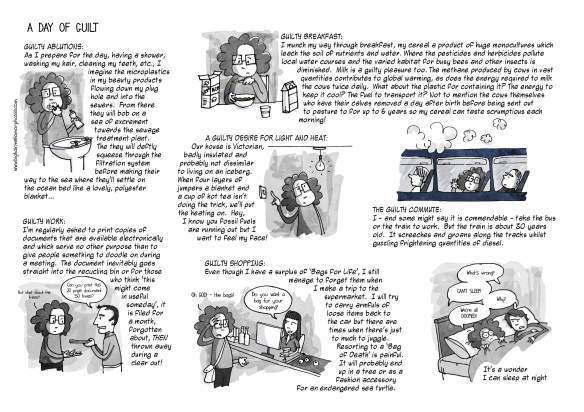