It’s been a while since I posted but the acquisition of an iPad Pro has breathed new life into my cartooning.   Once I would sketch in pencil, then trace my sketch multiple times until I got it right, then I’d scan it into the computer for colouring and touching up.  It was a chore.  But now, I can do all of that with my iPad and an Apple Pencil and upload directly to all my social media channels.  It’s revolutionary (for me – I’m sure I’m a bit behind the times). 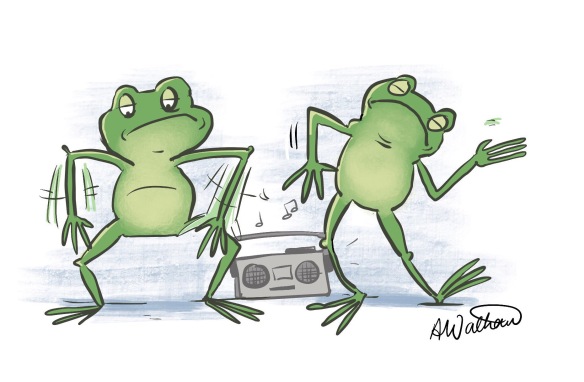 There’s been a mouse infestation at work which has brought drama and excitement to the office. One moment we were happily tapping away at our keyboards, the next there were yelps and squeals as a mouse the size of a 10p piece ran across the floor. Mayhem ensued – people were either rushing away from the mouse or towards it in an attempt to capture or kill it. Plots to capture it alive and take it to countryside were hatched. Excuses to work in another building were put forward. There were discussions about wearing wellies to work. From all of this, I observed three distinct camps and have drawn them for your entertainment!

When asked the above question by @OFFLIFE_comic for tonight’s #quickdraw theme, I figured a band of well trained monkeys couldn’t hurt! We were given an hour to draw a response…this was my quick effort. 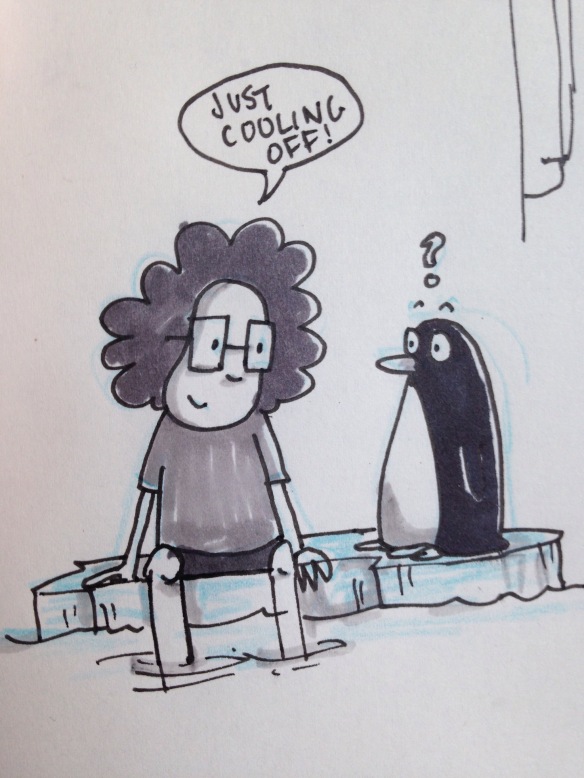 Squirrels have been a regular sight this holiday! Our campsite was besieged by them and our holiday cottage is frequented by a family of fat, quarrelsome squizzels searching for a tid bit or two! We even spotted one making off with an entire baguette (not ours I might add), he could hardly run straight under the weight!

I wasn’t aware baguettes were part of a squirrel’s diet…perhaps he was French?

I’m not sure what these two lads are up to but I’m sure it’s nothing good!

I’ve been holding onto this cartoon for an age, hoping that at some point I will think of a funny conversation between the two pigs. I’ve failed miserably. Sometimes the funny just won’t come! If you want to have a bash – be my guest! I’ll update it to include any good suggestions. 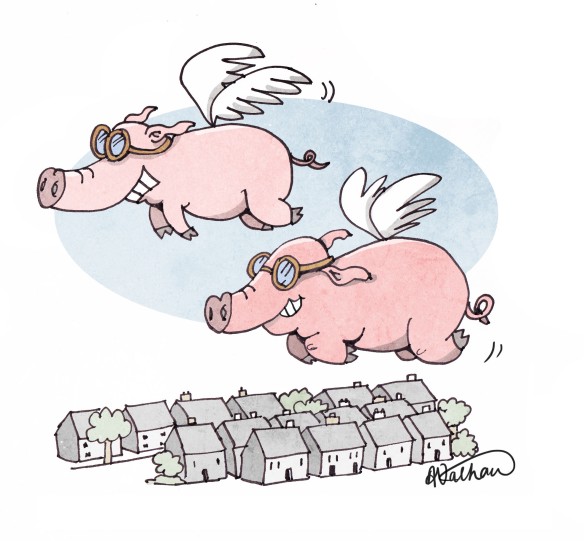 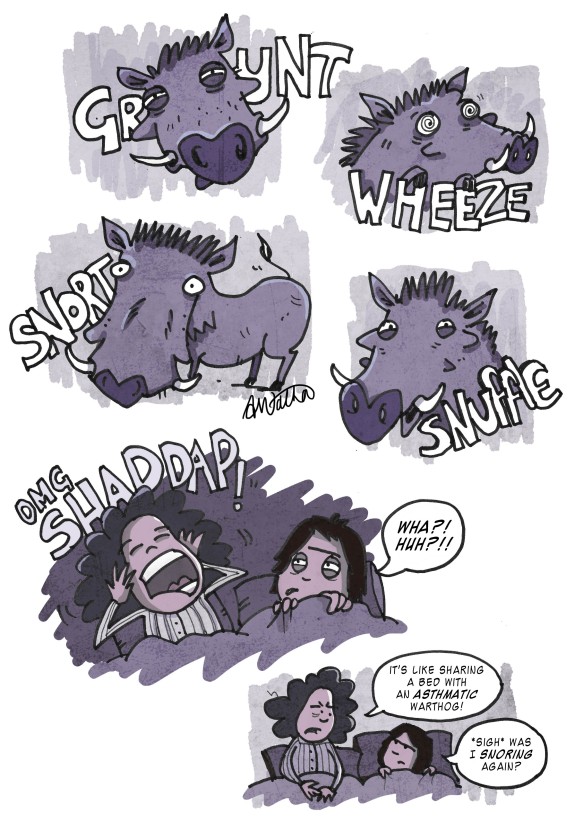 A friend at work had an idea to write a children’s book about a short sighted hippo…tonight I thought I’d sketch him. I’m still warming up (so to speak) and have yet to sit in front of the computer to scan and ink. It’s been nearly 8 months since I’ve felt remotely inclined to draw. Instead, I’ve been putting all my energy into photography. But a couple of weeks ago I did a small job for the English Speaking Cancer Association and their annual Paddle for Cancer dragon boat race! I suppose this gave me the boost I needed to open the pencil case! 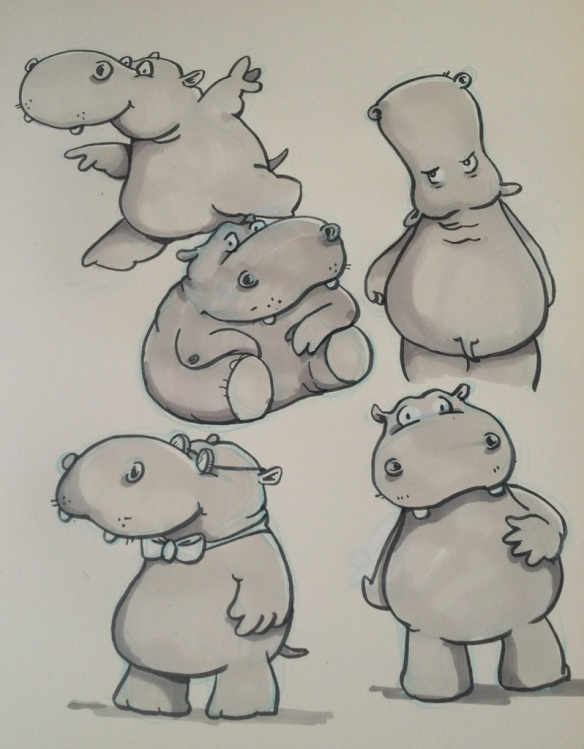 I drew a version of this many moons ago when it was all over the news. I don’t imagine it is very original but as I start to warm up the ink, I thought I’d redraw it! 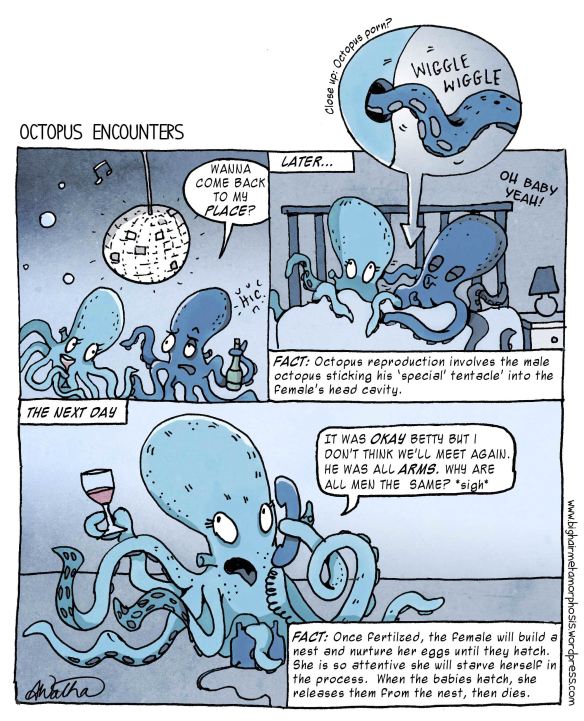 Did you know that the plural of octopus is octopuses or octopodes? Me neither. According to the dictionary, octopi is definitely wrong.

I’ve recently come to learn that octopuses are AWESOME! During our holiday in Greece we bumped into an octopus on three separate occasions. The waters around Kefalonia are crystal clear and bursting with interesting marine life; perfect for snorkeling. So, on one bright, warm day we headed out on an excursion with Jamie, a marine biologist, whose main area of study was octopuses, hence my sudden interest in them.

Our transportation for the day was a traditional Greek working boat or Kaiki which sailed us around the coast, stopping along the way to drop anchor so we could learn about urchins, starfish, eels, sea cucumbers and octopuses. Jamie, kept us rapt with tales of Greek mythology, mafia and marine life in between our snorkeling adventures when were left to explore the bays and mingle with the fish.

Within moments of taking our first dip into the water I stumbled upon an octopus gliding across the seabed – what luck! I squealed with excitement through my snorkel and called for Jamie who swiftly caught it, but not before it squirted us with ink and wowed us with its ability to change a variety of colours in a matter of seconds.

Back on board the boat, we stood over the little guy who eyeballed intently before trying to climb out of the temporary aquarium using its suckers. Not wanting to pass up the opportunity, I couldn’t help touching it. It probably goes without saying that feeling an octopus’s tentacles wrap around your hand is weird and slightly alarming – for a moment I thought it might never let go. After a few interesting octopus anecdotes we put him back in the water and watched him swim away.

Here are some things I learnt:

Below: A photo I took from the end of the pier near our apartment in Fiscardo – this chap was happily minding his own business.

Below: our transportation for the day. 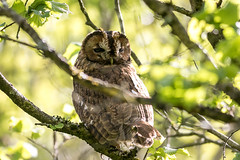